Claudia Kern: interview to the community

As the saying goes, another man's mind is a closed book, while your own one is closed even tighter. You may argue the charm and beauty of the S.T.A.L.K.E.R. world can only be understood in full by the ex-USSR residents. However, the fan community of the series grew well beyond the boundaries of the now disbanded USSR, and the German writers such as Bernd Frenz and Claudia Kern have been working hard on novelizations of S.T.A.L.K.E.R.'s setting. Almost a year ago Mr. Frenz gave an interview (German version) to GSC-Fan.Com, and now his colleague Claudia joined S.T.A.L.K.E.R. community with the answers. 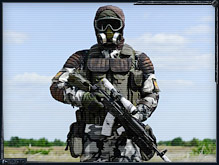 During the latest S.T.A.L.K.E.R.: Reality 6 airsoft role-playing game, a suit contest was announced among the participants. A selection of over 20 s.t.a.l.k.e.r.s have contested the S.T.A.L.K.E.R.-branded wear prizes offered by GSC Game World. As the results are drawn now, we are happy to introduce you the participants and winners. Check out this page with an array of photos here.

This June another big-scale airsoft cosplay – S.T.A.L.K.E.R.: Reality – took place in Kiev vicinity. Traditionally, the tournament provoked great interest among the S.T.A.L.K.E.R. community and the airsoft enthusiasts. The cosplay offered its participants unmatched atmosphere, true game spirit and a plethora of unique costumes hand-crafted after the computer game prototypes. Today we are glad to present you our photo report of the event.

Notably, for the first time at S.T.A.L.K.E.R.: Reality there was held the best suit contest. You are welcome to check the competing costumes and vote for your most liked one at YaStalker.com.

Attention of those who recently bought S.T.A.L.K.E.R.: Clear Sky on STEAM and experience problem activating/running the game. Due to technical mistake, the CD-key you received is non-working. To solve the problem, please, follow the link below where you check and change the old key with a new working one. https://stalker-game.com/cdkey/

On behalf of GSC Game World, we would like to apologize for any inconveniences caused.

A quarter century ago at 1:23 a.m. an extremely powerful heat explosion happened at the Chernobyl NPP, resulting in over a hundred tons of radioactive substances thrown out into the environment. The fallout equaling the explosion of 500 Hiroshima bombs dropped in 1945, it changed the lives of hundreds of thousands witnesses and liquidators of the disastrous accident for good. 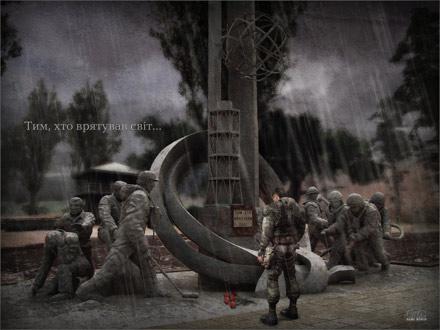 Today we express our deep respect and gratitude towards these courageous and selfless people who have protected us from the trouble.
Thank you... Let's have a moment of silent grief and remember the ones who are no longer with us.

On behalf of GSC development team, let us send our spring greetings of the International Women's Day of March 8! May this warm sunny day bring you joy and love! We wish you happiness! 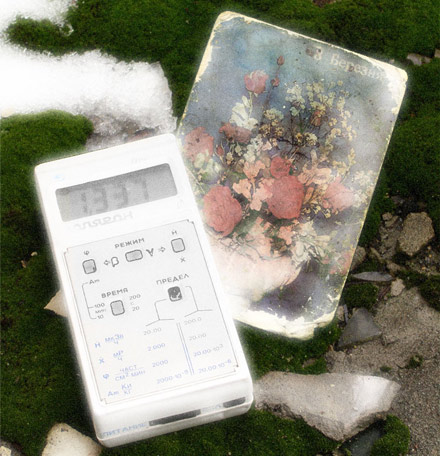 At the awards ceremony held on February 5 in Kiev Sergiy Grygorovych was declared the best Entrepreneur of 2010 and also won the Innovative Business Ideas nomination. In June 2011 Sergiy will represent Ukraine at the contest's international Grand Final in Monte-Carlo (Monaco).

We congratulate Sergiy Grygorovych on this outstanding acknowledgment and wish him good luck for the international Grand Final of the contest!
Many thanks to all of you who supported Sergiy on his way to winning the Entrepreneur of The Year title!

S.T.A.L.K.E.R., without exaggeration, is popular not only in the former Soviet Union, but also with players from all around the globe. The universe of S.T.A.L.K.E.R. attracts more and more people internationally and the growth of interest in the mysterious Zone continues.

Now and then, we may ponder, what do the developer-native Russian-speaking community think of the game? What do they like about S.T.A.L.K.E.R. and what are their expectations of the future sequel?

The Official S.T.A.L.K.E.R. community group on Facebook has initiated the collection of questions to the Russian-speaking fans of S.T.A.L.K.E.R. You have a wonderful opportunity to look at the S.T.A.L.K.E.R. universe through the eyes of game fans living in the ex-USSR part of the world, where the project originated from. Post your questions in the Facebook group page, just make sure they are written clearly and concisely. Try to come up with an interesting question, be inventive.

Have fun communicating with s.t.a.l.k.e.r.s all around the world!

In these festive days, STEAM digital distribution service offers unprecedented sales - until January 3, 2011 you can purchase GSC Game World games with a unique discount of 50%! Cossacks, S.T.A.L.K.E.R. and Heroes of Annihilated Empires have become so affordable like never before.

To proceed to the games catalogue page, click here.

On the New Year's eve, the S.T.A.L.K.E.R. project team has prepared a special present for mod-makers and all the game fans. Following your multiple requests, we decided to put the Software Development Kit for X-Ray 1.6 engine (S.T.A.L.K.E.R.: Call of Pripyat version) under the Christmas tree.

Please, note the following key features of the SDK 0.7:

! The tools are offered 'as is' and GSC Game World is unable to provide any technical support on this SDK. All the tools questions must be discussed on forum.

Have fun with the tools and Happy New Year!